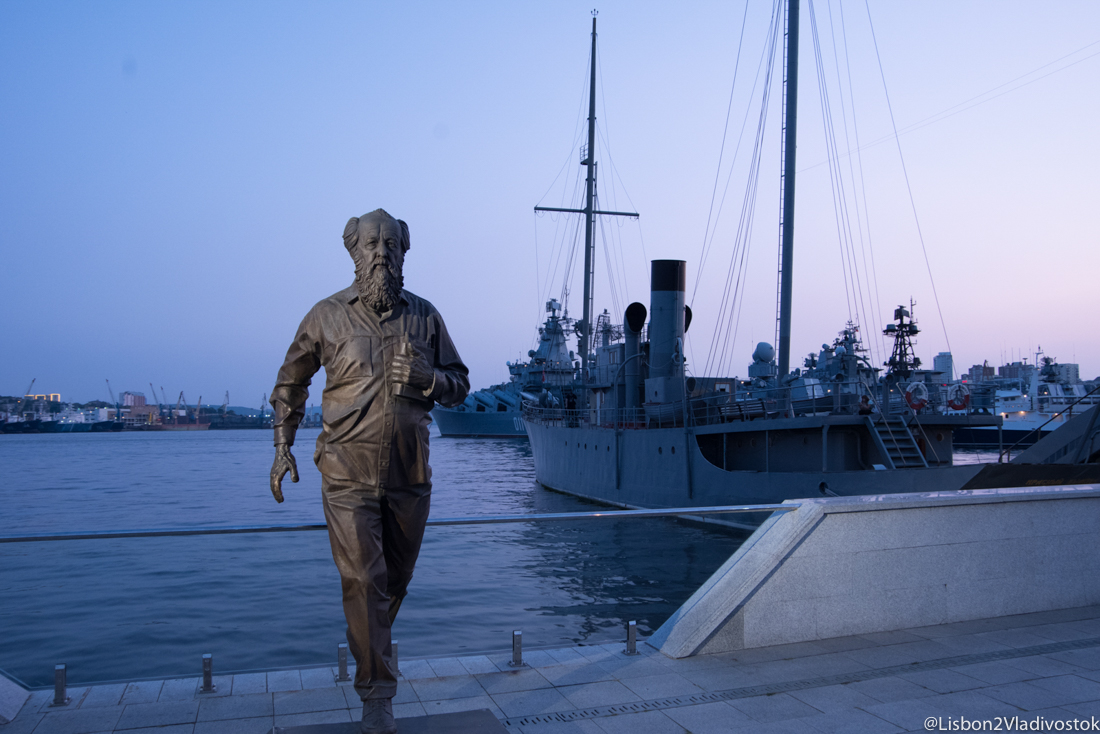 Russia
The last section: Through Siberia to Vladivostok
February 21, 2018 By Jana & Dima
0

The last part of our journey in Russia impressed us a lot. Even Dima, who knows the size of his own country, was surprised by the sheer magnitude of some areas. If you drive for days through the endless Siberia, you will realize how huge and diverse Russia really is. This far Eastern part of the country combines Buddhist monasteries, white sandy beaches on the Baikal, snow-capped mountains, countless lakes, hundreds of rivers, endless forests of the taiga and a beautiful Pacific Ocean coast. 1000 km from city to city is nothing in Siberia. The feeling of freedom around us made us take a deep breath. When camping on lakes and rivers we could forget about the world around us for a while. The beautiful birch groves and wooden houses are simply beautiful and typically Siberian.

We started near Ulan-Ude, in Ivolginsk, a Buddhist monastery. I have never associated Russia with Buddhism, but this doctrine is also present here. The monks in the monastery guard a small miracle: the "living" body of Lama Itigelow, who died in 1927 (during the mediation). In his testament he decreed that his body should be dug up again after 75 years. During his last exhumation it was found out that there aren´t any characteristics of decay on his skin, so the monks believe that he is still alive. In fact, the longer you look at him, the more alive he appears. So far, science has found no explanation for this phenomenon - an encounter of a special kind.

We went on to Lake Baikal. We've been to this fabulously huge lake four years ago, but on the western side. We are greeted by white sand and rushing waves. It looks a bit like the Baltic Sea, the only difference was that we here have hundreds of miles of forest around us. We enjoy the camper life, get water from the lake or at the well, eat several times the popular Baikal fish Omul and drink Russian wine. The wine is not that good, that it is a “must drink” ;).

Unfortunately, after only four days we have to continue. We would endure it for a while, but the calendar reminds us that it is time to leave.

The river Selenga has already accompanied us in Mongolia and we have spent several nights at its shore (in Darkhan for example). Now we arrive at the mouth of Selenga at Lake Baikal, the Selenga Delta. We drive to the village of Istomino and ask where we could rent a boat. We get directed to a house with an orange roof (not to miss). There Volodya lives with his family. He has the most beautiful boat in the village - but he does not advertise it, so just ring the bell. With him we sailed for three hours through the beautiful Delta of the Selenga. He showed us "his" little island - quiet and deserted. We wade through the warm water and looked out for the Baikal seal. Unfortunately in vain. It's such an incredibly beautiful spot, we would not have expected that.

Then our last long way to Vladivostok starts. 3600 km are in front of us. The reasonably well drivable "Amur Highway" leads from Ulan-Ude directly to Khabarovsk and from there to Vladivostok. The road was completed in 2010 and then inspected by Putin in a yellow Lada. Under the Siberian weather conditions, the asphalt often needs repairs and so the track is sometimes full of construction sites. Once one is done the next starts – a never-ending story. So many, little-known cities, such as Blagoweschensk, have surprised us on our way. Located directly on the Chinese border and separated only by the Amur River, it offers a colourful mix of ancient Tsarist architecture, Lenin statues and Chinese advertising signs. Right on the other side of the river is a ferris wheel, which already belongs to China and from the excursion boats Chinese and Russian tourists are waving each other. This reminds us that we are actually in the deepest of Asia, which we have completely forgotten on the way through the dense taiga.

Behind us is China:

Also Khabarovsk with its beautiful promenade, the many restored houses in the city centre is a positive surprise and a welcome change after the exhausting journey. Located directly on the Amur river, it invites to a boat trip and to explore the good restaurant scene. But things are not all that nice in Siberia: there are cities that are grey and gloomy, like the industrial Chita, for example. Large prefabricated buildings, car exhausts and old factories paint the picture there. Nevertheless, the Dekabristenmuseum is well worth it and you can learn a lot about the heroes of that era. There was even a great German guide.

In less than two weeks we reached our destination via the "Amur Highway". The roads until then were in good condition and much better than expected. The camping spots on lakes and rivers were really nice. Ok, except for the mosquitoes, but "No Bite" is the best accompaniment.

Before we arrive in Vladivostok, we camp one more night on the so-called Glass Beach. Years ago glass bottles and remnants of a porcelain factory were unloaded here. The nature has formed beautiful stones and created colourful works of art, which are glittering in the sun.

If you do not manage to wake up for sunrise, you unfortunately will see something like this:

Many people are camping here, so it is not very quiet, but the sunrise is worthwhile even when the clouds block the sun. Oh, and who thought, the sun rises over Japan, it is wrong. It is Russia where she shows up first. The sun barely missed Japan - but missed is missed 😉

Vladivostok is a vibrant Pacific Ocean port city with a marine flair, lush green spaces and a waterfront promenade. In addition to the fishing industry, the trade with Japanese cars forms the core business here, thus car repair shops, car dealerships and tire shops determine the cityscape outside the city centre. Outside the centre you are unfortunately reliant on crowded buses or the car. There are no bicycle lanes, although the city and the numerous surrounding destinations would definitely be suitable for excursions. After selling our gear and the car, we still spend a few relaxing, sunny days in the city, very close to Japan. We stuff ourselves with seafood, look for Amur tigers in the safari park and go on excursions to Russkiy Island, where after years of military compound, now the largest university in the Far East is located.

The Safari Park has a black goat. They named him Obama...

One shortcoming, however, is the amount of cars everywhere. For the Russians, a car is also a piece of freedom, and so they drive it as close as they can to the shore of a lake or the sea, if the road allows it. This somewhat diminishes the feeling of loneliness and often we have seen more cars on the beaches than people. What is unthinkable in Europe seems normal here. Our last two days without Kolya were tough. Overcrowded buses and hitchhiking were on the agenda.

These last two weeks in Siberia made a positive impression on us, made us want more of Russia and contributed to a successful end of our journey. We definitely want more Russia, because there are still a few spots to admire.

We were on the road for almost four months and drove a little more than 25.000 kilometres. It's hard to express how we feel: we're proud and relieved, but also a bit sentimental that the adventure is over. We are happy with all our experiences and are satisfied with our planning and organization, which actually brought us to Vladivostok on time. Four months went by quickly. We have seen and experienced so much that we first have to sort this in our heads. We had fewer problems and obstacles than expected and our car was a faithful companion. Our goal of driving from ocean to ocean and the task to pour a bottle of Atlantic water into the Pacific Ocean has been fulfilled. What we found between these two oceans is incredible: Namely how versatile and fantastically beautiful our Earth is. The worse part of it is to see with our own eyes how we humans partially deal with it – how much waste people throw into nature and how less do they care about it.

At some borders we have cursed and some countries have made our stay not easy. Nevertheless, we were rewarded with something special at each location, whether that was nature, beautiful places, the stories we were told or just really good food.

With our journey, we also went in search of similarities and differences between the people, but this is hard to tell in a few words. There is so much that connects them and as well what makes them different. There are helpful, amiable and interested people all over the world. But there are also those who throw away their garbage, poison the environment, expose animals or go through life with indifference. There are the unlucky people, whose eyes are full of sadness and those who walk through life laughing.

We are still far away from a world without borders. We have only just begun to realize, within the borders of Europe, how different the problems are that countries are struggling with and the enormous advantage we have over most of them. Just mentioning some of them such as infrastructure, education or the overall awareness of the people themselves. We can only recommend to everyone going on such a journey, because we have learned to renounce and enjoy. We are grateful for what we have and that we have so many opportunities in countries like Germany and Russia. Many things now seem clearer to us and we feel more cosmopolitan than ever before.