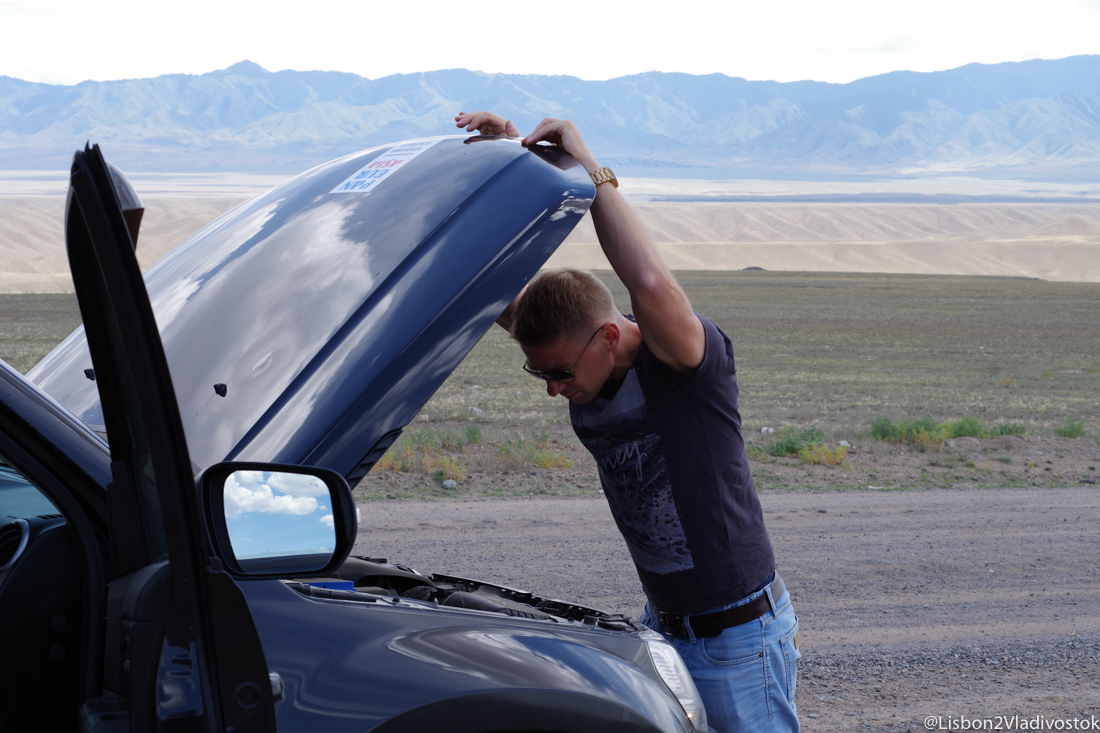 We are back in civilization. We have enough gasoline, relatively good roads and cold ice tea which you can buy at every gas service stations. Compared to Uzbekistan the local supermarkets are packed, because Kazakhstan has a more liberal trade policy. Like small kids we look forward to shopping nice things to eat or drink.

Our first stop is in Shymkent, where it's about time to clean Kolya, get some fresh cash, do some grocery shopping and buy a local sim card. With Beeline we get 24GB of Internet traffic and 300 minutes for about 12 EUR. Now we are ready to move on to discover Kazakhstan and drive through this huge country.

Even here in the South, it is also common for police officers to pull-out foreigners from traffic and prosecute them for nothing. I have seen Dima standing in front of a police car and negotiating, almost as often as in Uzbekistan. But most of the time we managed to get away by saying: "We just came from Uzbekistan and we have left all our money with the Uzbek police." The policemen usually laughed and sent us off.

On the highway from Shymkent to Almaty we find the perfect overnight camping spot besides a small lake. Fried quinoa with potatoes are still at the top of our diet.

Southern Kazakhstan has a lot to offer. The former capital Almaty has countless street cafés to relax and do some people watching. The old Soviet architecture has been largely preserved in Almaty, which in our opinion, only adds to the charm of this city. Although the capital of Kazakhstan was moved to Astana in 1997, Almaty is still the country's cultural and scientific center. Officially the relocation decision has been made due to earthquake risks and space shortage. However, unofficial sources say that more likely the goal was to increase the proportion of Kazakh population in the North and thus prevent a secession of the predominantly Russian populated region.

Not far from Almaty, we visit the Kolsay lakes: Three mountain lakes with crystal clear water. The first one you can reach by car, here we spent two days camping on the parking lot above the lake. The second lake you can reach only by hiking (about 3 hours one-way) or on horseback. We decided to hike: It’s a partially quite demanding path through a muddy mountain forest, but the crystal clear cold water and view from the second lake compensates for everything. The third lake is located close to the border with Kyrgyzstan and you need a special permit to go there or (as we heard) just some money to bribe for the border guards patrolling there.

Unfortunately, as we wanted to continue further, Kolya had some problems with the clutch. The car was not able to climb hills, so continuing into the steep Charyn Canyon was not possible. Since we could not find any car service which could help us in this area we had to drive back to Almaty for four hours.

Back in Almaty while the clutch was replaced we enjoyed two more days of city life. After the car was back to normal we headed to Charyn Canyon. There are several impressive places to visit here. We visited the Valley of Castles and on the same day continued to nearby Temerlik Canyon. Once you have found it (Coordinates: 43.366472,79.150333), it is possible to drive down into the valley. However, only with a 4x4 vehicle. It’s a hair-straining experience and I can hardly imagine how we shall drive up here ever again. You can only go down if you have previously registered at the "Valley of Castles" and have paid a small entry fee. Rangers also control this part of the national park. A river flows through the canyon and many trees and grasses create a kind of a green oasis here. Perfect for setting up our tent and lighting a campfire.

On the next day, after a two-hour fight between Dima and Kolya we finally manage to drive up the bumpy gravel road back up.

The key was in activating the right drive mode: Offroad driving takes some experience – luckily we met a local driver who helped us to solve our problem. Otherwise I think we still would be stuck in the canyon. He definitely has earned a present – one bottle of good vodka.

Now we head to North Kazakhstan. Two days of driving through steppe and barren landscapes are ahead of us.