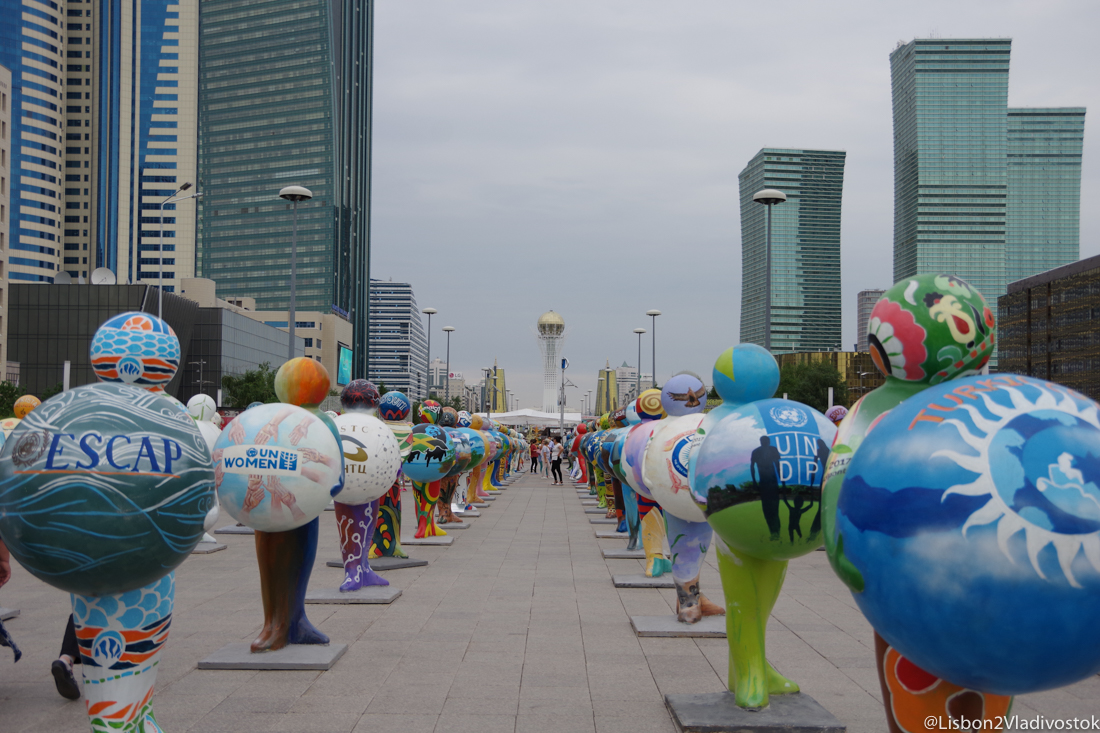 After two days of straight driving and 1300 kilometers later we reach Astana. The youngest capital city in the world and after Ulaanbaatar in Mongolia, the second coldest. Two days of nothing but steppe and a road that always leads straight ahead. In between a short night at a truck stop next to a truck that had it’s engine running all night.

Astana is a large, modern city and administrative center of Kazakhstan. Broad streets, steel-glittering skyscrapers and modern architecture dominate the cityscape. Dima feels a bit reminded of Moscow, I think it does not have the charm of Almaty. Most of the city's restaurants are located in malls, which is somehow strange. All city life seems to take place in this huge shopping malls – they are full of people until late in the evening, which could also be due to the harsh climate in the area. Astana is located in the middle of the steppe and a hot and windy summer is usually followed by an extremely cold winter.

We visit the city's landmarks, try some great Korean food in one of the malls and, of course, visit the Expo, which is being held for the first time in Kazakhstan. The motto of the event is Renewable Energies and we as „greenies“ are of course interested. The fairground is not that big, but most of the countries of the world are represented. Each one presents itself as the greenest in the world. Although many of the countries indeed introduced sustainable and environmentally friendly policies, many of the projects shown are just pilot projects or visions that are not yet reality. The Scandinavians, of whom each country could learn so much, are unfortunately not present. Georgia and Russia have somehow missed the topic, but have nice and colorful pavilions. Georgia shows (and sells) its wines and introduces visitors to the art of khinkali production. As we wander around we wonder if no one has told them the motto of the Expo in advance. Russia is presenting its new strong icebreakers with lots of horsepower and the Amur Tiger Reserve supported by President Putin. After all, these are honest and not distorted representations. The Kazakhs are proud that the Expo is taking place in their country. They pose in front of the colorful exhibits and take selfies in front of the pavilions. We doubt however that the Expo’s core message, that our earth will only have a future if people start thinking about environmental protection and producing less garbage, resonates with them. You can see a brief statement on the Expo in our video below.

After we've fueled enough city life and washed our laundry, we're drawn back to nature. We want to go to the Korgalzhyn Nature Reserve, which is about two hours southwest of Astana. It is one of the largest nature reserves in Kazakhstan and is a UNESCO World Heritage Site. It covers 5400 square kilometers of vegetation and provides habitat for numerous migratory birds, such as flamingos, pelicans, cranes, but also marmots, wild boars, wolves, rare steppe antelopes (Saiga) and other. You can visit the reserve only with a local guide. It is so huge that it would take you days to see it completely. We go for a one day trip, as my main goal is to see flamingos. We are lucky and indeed see a lot of flamingos feeding on a salty lake. They are far away so that we can only observe them with binoculars, but they are clearly flamingos. Never in my life I had expected to see flamingos in this country, however our guide proudly states that Kazakhstan is a country of flamingos. It is an impressive reserve and we seem to be the only visitors today. It is very lonely, quiet and we get to see a lot of wildlife completely undisturbed.

We like the peaceful nature so much here that we spontaneously decide to pitch our camp at a small lake (Coordinates 50.525891, 69.620100) and spend the night here. The spot is outside the reserve, but close to the flamingos and we spend one of the most colorful evenings of our trip there. We wake up with a magnificent sunrise, lot’s of flamingos and after recharging our batteries for the next two day drive. After two weeks in Kazakhstan, it's finally time for Russia. Siberia is on the next place on our map with a few days to wind down and camp in the Altai. We are planning to cross the border near Pavlodar.​